SIR – A few months ago I attended a meeting to look at the feasibility of completing the cycle track between Gowerton and Pontarddulais.  I’d always wondered why the link was never completed, and the answer shouldn’t have surprised me. The project was started by the old Lliw Valley Borough Council in the 1990s. When the new “City and County of Swansea” Council took over in the late 1990s, the project was kicked into the long grass.

No surprises there, then.

Now we hear that the Labour government in Cardiff Bay wants to resurrect West Glamorgan County Council through merging Neath and Swansea. It’s rather telling that Swansea leader Rob Stewart refers to this proposed entity as a “City Region”. What he’s talking about is the Swansea Bay City Region, which is where all the focus (and hence the money) will be. What about the outlying areas?

With this in mind, is it not time, then, that we also brought back the old Lliw Valley district council too? One way to do this is by merging community and town councils in the area to make a bigger entity. Still small enough to reflect an area with a distinct identity – but big enough to have a real strategic focus and not be swallowed like Jonah up by the big whale the Welsh Government are going to drop in Swansea Bay. 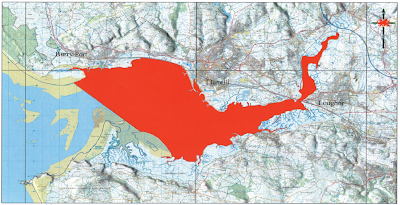 A beautiful sunny day at the Pontarddulais Show saw a well-attended stand organised by the Greenspace Cymru umbrella group today, with many residents from around the area expressing concern in particular about the proposed "Coal Seam gas" development proposed for the Burry Inlet.

One high profile guest popping in for a chat was the local Assembly Member, Edwina Hart, and she was quizzed by a number of us on the Welsh Government's position on this development. Of course many aspects of it  - including the licensing blocks - are consented by the UK Government in London, which meant that, unsurprisingly, Edwina was quick to point out that the Cardiff Bay administration does not have power over many aspects of these developments.


There may be grounds to call in the application. Underground Coal Gasification surely falls into at least one of these categories, if not more. The technology is relatively untested in the UK, and given the Burry Inlet is a protected SSSI, SPA and SAC protected under both British and European law, the nature conservation issues raised are likely to be significant. The Burry Inlet also supports important local industries, such as Cockling and fishing, so there are economic impacts too.

Credit Where Credit's Due!

Great news to see manufacturing back on the up in Gorseinon after years of decline. But while Labour appear keen to attach their name to the official opening of the car plant at Heol Y Mynydd, Gorseinon, let's give credit where credit's due...

"AS deputy mayor of Gorseinon, I would also like to wholeheartedly welcome Toyoda Gosei's decision to    increase its workforce up to 500 new employees over the next five years at their Gorseinon factory.
This is excellent news for our town and it is great to see the old Valeo site bustling with manufacturing activity again after years of disuse.
However I feel compelled to write because your report on April 6th failed to mention an unsung hero — the man who single-handedly brought Toyoda Gosei to Gorseinon.
That man is Ieuan Wyn Jones, Plaid Cymru's Deputy First Minister from 2007 to 2011. It was Mr Jones who led a trade mission to Japan in 2008, where he held talks with Toyoda Gosei executives and persuaded the company to invest in Gorseinon.
I have to say it was quite galling to read a report which was dominated by local Labour party politicians queuing up to take credit for this news. They were quiet and wringing their hands when Valeo and the Bryngwyn Steel works were closed under a Labour Government a decade ago.
They did absolutely nothing to protect high quality manufacturing jobs in Gorseinon back then."
Councillor Darren Thomas
Plaid Cymru

An Important Date for our Green Spaces

The Local Development Plan currently being developed by Swansea Council reaches an important Milestone next Thursday when the completed Stage 1 of the Plan goes before Swansea Council for discussion. The fact that Swansea have had such a tremendous response to the plans, with over 41,000 residents commenting on 558 sites, shows the strength of feeling in many communities on many of the proposed sites.
In the Gorseinon and Loughor areas, Plaid have taken a proactive approach and hosted our own "Consultation events" to involve the community. We have worked with local residents to re-nominate land as Green-belt under the new Plan.
With the local elections on the horizons, elected members will also be sensitive to the views of the public on this issue. It will in all likelihood be a key topic during the election campaign. A strong public presence at next week's meeting will send our elected representatives an important signal.
Our position in Lliw Valley Plaid is clear and unambiguous. We will campaign to protect our existing green spaces under the new Plan and will continue our good work with local communities to do so.
The Agenda for next week's Planning meeting can be found at this link
Posted by Draig at 17:00 1 comment: